Another anime will hit the Philippine’s largest exhibitor – SM Cinemas. After a series of successful showing of what became famous Anime Movies comes No Game No Life: Zero.

As stated in the coming soon area of SM Cinema, No Game No Life: Zero will be released in December 6 ( Wednesday ). 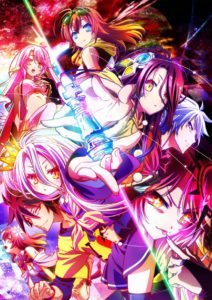 Prequel to the famous novel-turned-movie of No Game No Life, Zero is set in a war-consumed land where chaos and destruction threatened the extinction of man. As one man leads humanity toward a better tomorrow, he meets an exiled female android who learns what it means to have a human heart and how it feels to fall in love.

One Punch Man Season 2 Promotional. Season 2 starts on April 2019 but exact date is yet to be determined. One Punch Man was first aired on December 2015. Whilst there were yearly announcements of the probable sequel, this is the solid proof that the animation will indeed continue. Check out this Season 2 Trailer […]

Earlier today, a footage was uploaded regarding the Batman Anime (Batman Ninja) which was first shown at New York Comic Con. Though the looks of Batman itself, is more like those that was presented in previous animated Batman movies, this one’s more bulkier. What more when Batman himself turns into a Ninja!? Given the teaser, […]

With the trend keeps on coming for MOBA category games, a gem has been hidden for far too long. Well, I guess not really hidden as it stands with 10M in Google Play Store downloads alone! Zooba – Zoo Combat Battle Royale Games is a Multiplayer Online Battle Arena (MOBA) game with a fast paced […]